So, your Summer holiday got cancelled and now you’ve come to the realisation that you’re going to be home bound for the foreseeable future. Sound about right?

Since Coronavirus has put a halt to all of our pre-planned Summer trips, adventures and escapes, it’s time to appreciate new ways of enjoying a nice little staycation. Whether that be from the comfort of your own home, across the country or down the road, you can’t deny that everyone needs a break. With that break, you absolutely need a supreme holiday read!

I don’t know about you, but for me no holiday read would be complete without a healthy side of romance. That’s why I’ve put together a little list of romance recommendations, perfect for your Summer staycation.

While on a writing retreat by the beach, a romance author and a literary writer strike a deal and swap genres for the Summer, getting to know more about each other along the way.

This is exactly my definition of a fun ‘beach read’, and would be a dream to devour on an exotic beach, with sand in my toes, the song of waves crashing in my ears and a piña colada in hand. For now though, a staycation in Ireland while sitting down with a cup of tea and this dreamy read will have to do.

Augustus Everett is an acclaimed author of literary fiction. January Andrews writes bestselling romance. When she pens a happily ever after, he kills off his entire cast.

In fact, the only thing they have in common is that for the next three months, they’re living in neighboring beach houses, broke, and bogged down with writer’s block.

Until, one hazy evening, one thing leads to another and they strike a deal designed to force them out of their creative ruts: Augustus will spend the summer writing something happy, and January will pen the next Great American Novel. She’ll take him on field trips worthy of any rom-com montage, and he’ll take her to interview surviving members of a backwoods death cult (obviously). Everyone will finish a book and no one will fall in love. Really.

A rom-com based around two actors trying to recover their careers, reminiscent of a true telenovela.

If you’re looking for an easy, fluffy read with a likeness to ‘Jane the Virgin’ or ‘Ugly Betty’, then this is the book for you! While the drama (much like in real telenovelas) never stops, the mood also never dips too low – which makes it perfect for curling up with during the Summer holidays.

Leading Ladies do not end up on tabloid covers.

After a messy public breakup, soap opera darling Jasmine Lin Rodriguez finds her face splashed across the tabloids. When she returns to her hometown of New York City to film the starring role in a bilingual romantic comedy for the number one streaming service in the country, Jasmine figures her new “Leading Lady Plan” should be easy enough to follow—until a casting shake-up pairs her with telenovela hunk Ashton Suárez.

Leading Ladies don’t need a man to be happy.

After his last telenovela character was killed off, Ashton is worried his career is dead as well. Joining this new cast as a last-minute addition will give him the chance to show off his acting chops to American audiences and ping the radar of Hollywood casting agents. To make it work, he’ll need to generate smoking-hot on-screen chemistry with Jasmine. Easier said than done, especially when a disastrous first impression smothers the embers of whatever sexual heat they might have had.

Leading Ladies do not rebound with their new costars.

With their careers on the line, Jasmine and Ashton agree to rehearse in private. But rehearsal leads to kissing, and kissing leads to a behind-the-scenes romance worthy of a soap opera. While their on-screen performance improves, the media spotlight on Jasmine soon threatens to destroy her new image and expose Ashton’s most closely guarded secret.

Out of Love by Hazel Hayes

This book truly is a tonic for the soul. It’s unapologetically honest portrayal of how messy and brutal love really is, but also how resilient the heart can be, are what make this story feel so refreshing and authentic.  If you’re looking for a book to connect with, then this is the one for you.

As a young woman boxes up her ex-boyfriend’s belongings and prepares to see him one last time, she wonders where it all went wrong, and whether it was ever right to begin with. Burdened with a broken heart, she asks herself the age-old question . . . is love really worth it?

Out of Love is a bittersweet romance told in reverse. Beginning at the end of a relationship, each chapter takes us further back in time, weaving together an already unravelled tapestry, from tragic break-up to magical first kiss.

In this dazzling debut Hazel Hayes performs a post-mortem on love, tenderly but unapologetically exploring every angle, from the heights of joy to the depths of grief, and all the madness and mundanity in between. This is a modern story with the heart of a classic: truthful, tragic and ultimately full of hope. 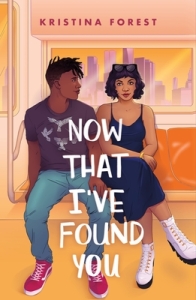 A YA novel about searching for answers, love, and your eccentric grandma in all the wrong places.

If you’re looking to diversify your shelves then you’ll be glad to know that both the author, Kristina Forest, and the wonderful cast of characters featured in this book are all black/POC. Not only that, but the story itself is full of romantic tension, Hollywood scandal and features a fun-filled chase around New York – what’s not to love?

Following in the footsteps of her überfamous grandma, eighteen-year-old Evie Jones is poised to be Hollywood’s next big star. That is until a close friend’s betrayal leads to her being blacklisted . . .

Fortunately, Evie knows just the thing to save her floundering career: a public appearance with America’s most beloved actress—her grandma Gigi, aka the Evelyn Conaway. The only problem? Gigi is a recluse who’s been out of the limelight for almost twenty years. Days before Evie plans to present her grandma with an honorary award in front of Hollywood’s elite, Gigi does the unthinkable: she disappears.

With time running out and her comeback on the line, Evie reluctantly enlists the help of the last person to see Gigi before she vanished: Milo Williams, a cute musician Evie isn’t sure she can trust. As Evie and Milo conduct a wild manhunt across New York City, romance and adventure abound while Evie makes some surprising discoveries about her grandma—and herself.

The Simple Wild by K.A Tucker

City girl takes on the Alaskan wilderness to reconnect with the father she hasn’t spoken to in years, and ends up on a journey of self-discovery.

If you’re feeling the travel itch, but resigned to the fact that we’re all pretty confined and adventures are limited for the time being, at least this book and the sequel, ‘Wild at Heart’ can offer a vivid sense of escapism. Be warned though, the way Tucker describes the beautiful Alaskan wild will make you want to book a trip there ASAP!

Calla Fletcher wasn’t even two when her mother took her and fled the Alaskan wild, unable to handle the isolation of the extreme, rural lifestyle, leaving behind Calla’s father, Wren Fletcher, in the process. Calla never looked back, and at twenty-six, a busy life in Toronto is all she knows. But when Calla learns that Wren’s days may be numbered, she knows that it’s time to make the long trip back to the remote frontier town where she was born.

She braves the roaming wildlife, the odd daylight hours, the exorbitant prices, and even the occasional—dear God—outhouse, all for the chance to connect with her father: a man who, despite his many faults, she can’t help but care for. While she struggles to adjust to this rugged environment, Jonah—the unkempt, obnoxious, and proud Alaskan pilot who helps keep her father’s charter plane company operational—can’t imagine calling anywhere else home. And he’s clearly waiting with one hand on the throttle to fly this city girl back to where she belongs, convinced that she’s too pampered to handle the wild.

Jonah is probably right, but Calla is determined to prove him wrong. Soon, she finds herself forming an unexpected bond with the burly pilot. As his undercurrent of disapproval dwindles, it’s replaced by friendship—or perhaps something deeper? But Calla is not in Alaska to stay and Jonah will never leave. It would be foolish of her to kindle a romance, to take the same path her parents tried—and failed at—years ago. It’s a simple truth that turns out to be not so simple after all.

Those are just a few of my holiday read recommendations. If there’s a book you know of, which I should pick up for my next staycation, then please let me know in the comment section below this post.

Check out my Bookstagram!